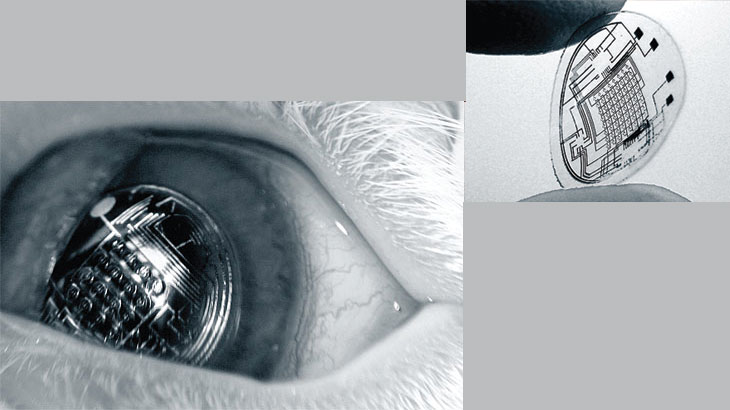 Conventional contact lenses are polymers formed in specific shapes to correct faulty vision. To turn such a lens into a functional system, we integrate control circuits, communication circuits, and miniature antennas into the lens using custom-built optoelectronic components. Those components will eventually include hundreds of LEDs, which will form images in front of the eye, such as words, charts, and photographs. Much of the hardware is semitransparent so that wearers can navigate their surroundings without crashing into them or becoming disoriented. In all likelihood, a separate, portable device will relay displayable information to the lens’s control circuit, which will operate the optoelectronics in the lens.

These lenses don’t need to be very complex to be useful. Even a lens with a single pixel could aid people with impaired hearing or be incorporated as an indicator into computer games. With more colors and resolution, the repertoire could be expanded to include displaying text, translating speech into captions in real time, or offering visual cues from a navigation system. With basic image processing and Internet access, a contact-lens display could unlock whole new worlds of visual information, unfettered by the constraints of a physical display.

Besides visual enhancement, noninvasive monitoring of the wearer’s biomarkers and health indicators could be a huge future market. We’ve built several simple sensors that can detect the concentration of a molecule, such as glucose. Sensors built onto lenses would let diabetic wearers keep tabs on blood-sugar levels without needing to prick a finger. The glucose detectors we’re evaluating now are a mere glimmer of what will be possible in the next 5 to 10 years.